Greetings dear friends.  I come to you today feeling ashamed of my lack of action.  Yet blessed that the Lord has opened my eyes to the lesson & the opportunities awaiting us.


First, I must let you know this is longer than my usual writings.  Typically I will break them down & spread them over the appropriate amount of weeks, but this one is special.  I believe you will find it well worth your time.  Please enjoy. 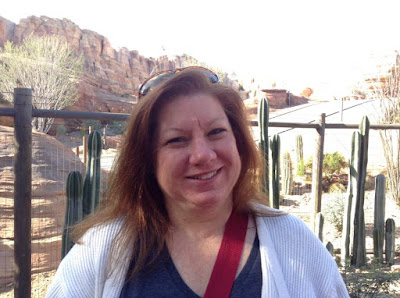 This year (2017) a beautiful soul left her earthly body for her heavenly home.  Her name is Annette Hersey & she was a co-worker.  She worked on a different floor than me, but I would see her a couple times a week.  She was always upbeat & smiling.  Her fiery red hair seemed to pale in the light of her smile.  Her quick wit always ended in laughter & you always left her presence with your own smile.
Annette started with our office in May of 2014, moving over to the Annex in September of 2014.  She immediately threw herself into learning her new positions.  Then, one day in February of 2016, Annette was told she had breast cancer.
Annette was determined she was in control, not the disease & continued to work while driving to her treatments.  Annette knew that chemo will cause your hair to fall out & she decided to cut it before that happened.  While it was just the cutest hairdo & Annette’s brilliant smile was still in place, you knew it must have been a heartbreaking discussion.  As the treatments continued & the hair loss progressed she started to wear the cutest hats to keep her head warm.  She wore her baldness as a badge of honor, opting out of wigs.  Through it all, Annette’s sense of humor was always shining. 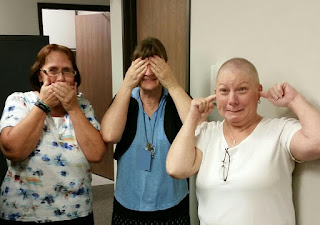 I haven’t known very many women with breast cancer.  Three other than Annette, actually & all survived.  I believe they also had double mastectomies.  So, when I first heard Annette had breast cancer, I figured, with her uplifting attitude she was sure to beat it.
Then, in early 2017, we learned she was in Stage 4.  The doctors continued to cut away cancer, leaving her weaker each time.  She no longer was working; her energy was needed to continue the fight.  Slowly you could see Annette was struggling to keep up her battle.


She was not in this battle alone, though.  God had brought her beloved to her just a few years earlier.  Between them they blended her 3 children & his 2 children into one, loving family. 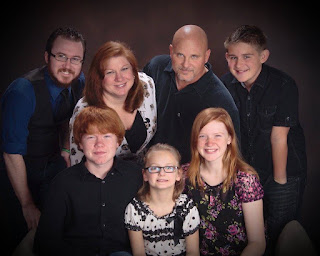 Shortly after the office learned about Annette’s cancer, Jay, her beloved, invited all of us to a surprise birthday party for her.  It was April 15, 2017.  It so happened it was a weekend my beloved was home, so we decided to attend & celebrate this lady.  That was my first opportunity to meet Annette’s home life & my husband’s only time to experience Annette.
I found Annette’s home to be warm, welcoming & filled with love.  Love of the Lord & love for each other.  My husband commented many times during Annette’s battle on how she exuded love & caring.
As I mentioned, Annette walked her path with the Lord, “Yea, though I walk through the valley of the shadow of death, I will fear no evil: for Thou art with me; Thy rod & Thy staff comfort me”. (Psalm 23:4) & how she faced this disease.  But the same Lord had different plans for His daughter.
August of 2016 Annette & Jay woke up to realize Jay had a stroke.  Jay ended up in complete recovery, but Annette opted to stay at home, then, tending to her beloved, while going to her own appointments.
Jay puts it this way, “The only reason she took off work in 2016 was to take care of me following my stroke in August. I honestly feel that my stroke and ultimately my recovery was a blessing. Had it not been for it she would have continued to work and not taken the time she needed as she underwent radiation. I also would not have been able to dedicate as much time as I needed to in supporting her through it”.
At work, there were those who stayed in contact with Annette.  Sharing the news from work, how things were working & the changes to be learned when Annette returned.  We had a potluck day for her.  It gave us the opportunity to see Annette.  As her illness progressed an opportunity for individuals to provide her & her family with a meal opened up.  Another opportunity to visit this beautiful lady.
October of 2017 found Annette back in the hospital.  A tumor on her brain had been located after stroke-like symptoms.  It would affect her ability to see clearly.  She would understand what was being said to her, but unable to formulate a response.  Simple tasks now required assistance.  Due to her diminished energy, Jay made a bed for them downstairs.  But Annette was still fighting.  She did not feel she was being called home.  It was not to last much longer.
On November 19th, 2017, Annette spent her morning with her beloved, Jay & studying the Word of our Lord.  She closed her eyes.  Her spirit left her body & Annette is no longer in pain.
Here is how Jay explains it: “We discovered the lump at the end of 2015. She was diagnosed in February 2016. She underwent 6 rounds of chemo (1 day every 3 weeks) to shrink the tumor which it did remarkably well. She then had a lumpectomy in which 13 of 15 lymph nodes were cancerous.
Following her lumpectomy she had a PET scan which showed her cancer free. Even though she was cancer free she still underwent 33 radiation treatments. We still second guess ourselves in going through with radiation.

We then discovered either in late 2016 or early 2017 that there was more. This time it was both in the lymphatic system as well as visible on her skin which was now considered stage 4. She underwent more chemo, this time weekly.

In about October/November is when were informed of the spread to the lungs, bones & brain. She was doing radiation on the brain right up to the time she died on November 19, 2017. Up until the last 6 weeks or so, which was such a rapid decline in her health, we still thought we would beat it.

She didn’t really ever need pills to offset side effects of chemo. She had problems with appetite and the way food tasted, but nausea was not too bad.

She may have been given some nutritional recommendations and alternative natural alternatives, but it certainly wasn’t stressed.”
Thank you, Jay, for sharing.
I attended the Celebration of Annette Hersey on December 17th, 2017.  She touched so many lives & they all said pretty much the same things about her.  Beautiful smile, gracious spirit, positive sight, wonderful woman, God’s light in this world.
Where does my shame come into this story of Annette?  Let me explain.  As you know I have an on-line store, LBEliteAromas.com.  My focus started with just the way Essential Oils are able to improve mental health.  As I have been researching I’m learning of the medicinal features of Essential Oils.  While I did mention to Annette, almost in passing, about the benefits of Cannabis Essential Oil, I did not do more research on cancer & what effects Essential Oils, Aromatherapy, Meditation & Yoga can have on it.  Instead, I prayed for God to heal her.
While that is not a bad thing, I believe I was being called upon to do more.  Now, I know there is no way to know what the results would have been had I spoken.  Would it have eased any of her physical discomfort?  Unknown.  A difference in the result?  Again, unknown.  God’s plans are His to know. **   We are called to answer & walk in faith.
That’s were the blessing enters.  My goals for my future are to learn more about Essential Oils & how they can be utilized to offer comfort & possibly heal one physically, mentally & spiritually.   I will research Aromatherapy, Meditation & Yoga & how we create our reality, twice.  I will be continuing my journey to improve me physically, mentally & spiritually through the practice of Aromatherapy, Meditation & Yoga.  I will share my research, lessons & experiences with you.  I will be attempting to give you knowledge, so you can make more informed decisions in your life for your health & the health of those you love.
I will speak up.  I will offer the information I have & research to learn the specifics for you.  I missed the chance to suggest options to Annette, but in Annette’s memory I will follow that small, still voice & step up.  I will find how to tie it together.  I promise to do this for you & your loved ones.
I know not where these steps will take me, but follow me on this amazing journey.  I promise to do my best to keep it real.
I thank you for spending this time with me.  I pray for your good health.  ‘Til next we meet, Be Blessed, my friends.
LB
https://www.lbelitearomas.com/
@LadyBonser
* Lymphedema refers to swelling that generally occurs in one of your arms or legs. Sometimes both arms or both legs swell.
Lymphedema is most commonly caused by the removal of or damage to your lymph nodes as a part of cancer treatment. It results from a blockage in your lymphatic system, which is part of your immune system. The blockage prevents lymph fluid from draining well, and the fluid buildup leads to swelling.
While there is presently no cure for lymphedema, it can be managed with early diagnosis and diligent care of your affected limb.  (Mayoclinic.org}
**There was once a man who was very devoted to God.  One day, God asked His faithful servant to push on a very large boulder with all his might, every day, all day.  Although the man didn’t understand God’s plan, he got up every day & pushed with all his might against this boulder, all day.
One day, as the man was pushing against the boulder with all his might, another man came upon our devoted son & asked what he was doing & why.
Our man stated he was pushing against the giant boulder because God had asked him to do so.
“How long have you been pushing it?  How far have you come & to where are you pushing it?”, the second man asked.
“Oh, a long, long time, years even.  As for the distance I have moved it, it is nowhere.  Here it was when I started, here it still sits, “came the answer.
“Then, what’s the purpose for pushing it?”, asked the stranger.
Our man stops to think about this question.  The stranger shrugs his shoulders, thinking our man is a fool & walks away.
This faithful servant turns his thoughts to God & says to God, “I have been attempting to move this boulder for years & yet is has not moved even an iota.  Why have you set me such an impossible task, Lord?”
To which our loving Father answers, “I gave you the task of pushing on the boulder, not for you to move it, My son, but so you would develop the muscles in your body & the faith in your soul to be ready for the next step in My plans for you.”
Jeremiah 29:11
“For I know the plans I have for you,” declares the Lord, “plans to prosper you & not to harm you, plans to give you hope & a future.”